What Noise Does a Spider Make?

Listen to this amazing new recording from Vladimir Arkhipov of a wolf spider drumming in Russia – https://www.naturesoundmap.com/listing/drumming-wolf-spider/

We’re now up to a total of 400 recordings from 81 countries & 93 contributors – put some headphones on and enjoy!

Several new recordings have been added to Nature Soundmap over the past week – the total is now up to 376 recordings from 81 countries!

A special thanks to Fintan O’Brien for submitting multiple high-quality recordings from Ireland, Belize, Costa Rica, Finland and Estonia.

Some of this weeks highlights include:

Put some headphones on and enjoy!

The first audio recordings from Ukraine added to Nature Soundmap! Steppe Marmots squeaking, and a soundscape from Dvorichansky National Park. Thanks to Oleksij Vasyliuk for these two submissions.

In case you haven’t checked in a while, a number of new recordings have been added to Nature Soundmap – in fact, the total is up to 376 recordings from 81 countries!

Some highlights from the past couple of months include:

Put some headphones on and enjoy!

The Effects of Noise Pollution on Whales

Important research published regarding the effects of noise pollution on whales.

Scientists played sonar to a group of hunting Cuvier’s beaked whales which had been tagged. In response to the sounds, the whales quickly stopped hunting and “swam rapidly, silently away”.

Regarding Blue Whales, the researchers found “…one animal was diving and feeding repeatedly all throughout the day, and as soon as the sound started, the animal stopped feeding and maintained a directed heading and moved away from the sound source.

These vast animals can scoop up half a million calories worth of krill in one gulp as they dive, so disturbing their feeding deprives them of large amounts of energy…”

The last four weeks have been slower than usual on Nature Soundmap, mainly due to a programming hurdle which I’ve been working hard to ‘jump over’*. (see footnote).

Because of this, I’ve been hesitant to invest too much time into adding new content & implementing new ideas until we find a solution. Thankfully a kind web developer has offered to help me out and it is likely the problem will be resolved in the coming few weeks.

Now with this little burden off my shoulders, we’re ready to launch a new ongoing feature of Nature Soundmap – publishing regular articles contributed by our recordists. I’m sure you’d agree that we have a rather eclectic bunch of contributors, and for this reason we decided to draw on some of this wide-ranging experience and share the stories and insights / nature sound recording.

Articles will cover a wide ranges of subjects & include:

If you’d like to stay up to date with the articles, simply subscribe to the blog via email using the ‘Subscribe via Email’ form in the sidebar of this page, and you’ll receive notifications when new content is published.

Our first contributed article is from Christine Hass entitled “Sonic Memories“, a discussion of how sounds have the ability to take us back to places we’ve been in the past.

* Currently, the way the homepage loads is not ideal – it pre-loads all 300+ listings as well as every image associated with each recording, making the homepage load time slow. I’ve explored a number of solutions to this issue, but ultimately I am out of my depth when it comes to this type of programming & it’s a job for a ‘real’ web developer!

Sounds have the ability to take us back to places we’ve been in the past. Likewise, some of the most notable things I remember about some places are the sounds. Several places really stand out that way for me.

Back in 1984, I was in the Yukon (Canada) for a conference. As part of the conference, we took a trip out to a field station for the Arctic Research Institute, where we were to listen to a talk by a preeminent ecologist. After too many days cooped up in a dark conference center, I wandered away from the group, inexplicably drawn to the shore of a frozen lake. It was late May, and the lake was just starting to thaw. It had thawed into tiny columns of ice, with little or no open water. As I sat on the shore, a breeze wafted across the ice, creating a tinkling noise, like a little child’s piano. It was magical. I sat there, enthralled by this incredible music drifting across the ice, the sound fading and getting louder, circling over the lake, I completely forgot about the speech I was supposed to be attending. When my companions found me later, they admonished me, “You just missed a talk by A.R.E. Sinclair!” (one of the world’s foremost experts on dynamics of the Serengeti). I was sorry to have missed the talk, but as a field biologist, I’m sure Dr. Sinclair would have understood why I missed it.

In 2008, I took a trip with some family members to Guatemala. As part of the trip, we took an excursion to watch the sunset from up on an active volcano. Most of the volcanoes in that area spew ash, rocks, and steam from the very top, but this particular volcano had started a Stromboli flow, in which thick, liquid lava flows from the side of the volcano. This type of flow is more common to Hawaiian volcanoes than those in Guatemala. When we arrived on the rim, it was encased in clouds and mist. As darkness approached, the mist lifted enough for us to see into the crater and watch the bright lava as it oozed from fissures in the side of the crater, slowly flowing and tumbling its way toward the bottom. The sound made its way up to us on the rim, also. I would have expected a gurgling, gloppy sound, but instead what arrived up on the rim was the sound of breaking glass. Thin, delicate glass being dropped onto pavement; that’s what it sounded like. The mist, the greenness, the sight of the hot, molten lava moving down the side of the crater accompanied by the sound of breaking glass have created an indelible memory for me. This is a photo of the volcano; look carefully and you can see the red ribbons of lava. 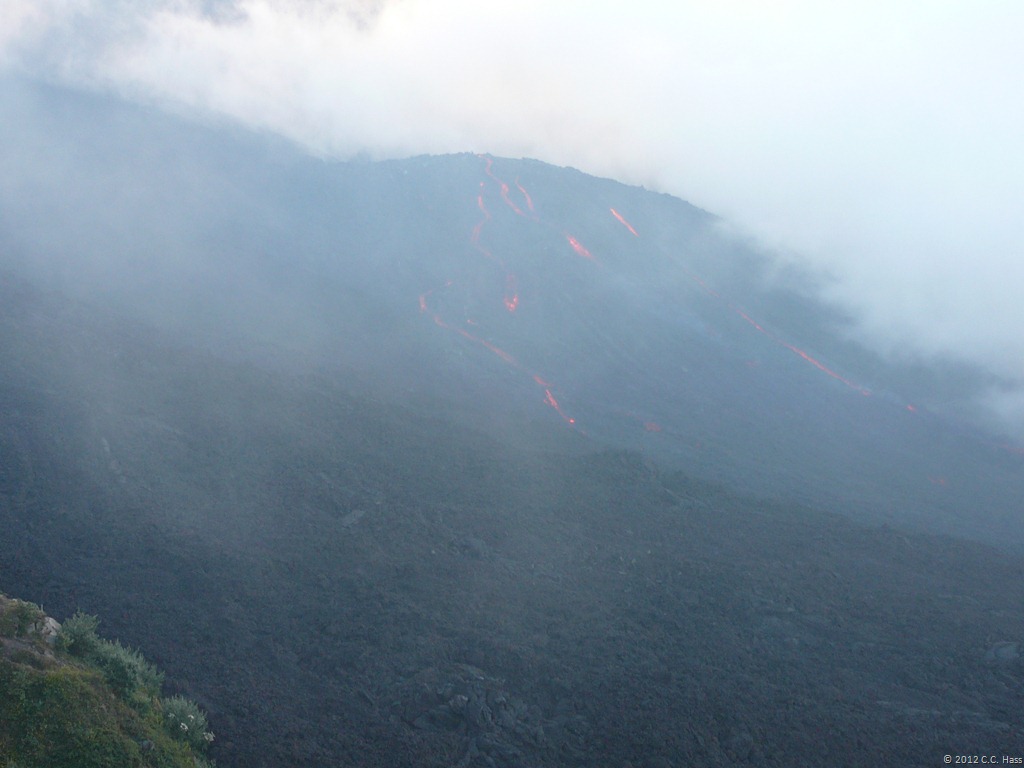 For 7 summers in the late ‘80s and early ‘90s, I spent my summers living in a tent high up in the Pecos Wilderness, New Mexico, where I was conducting studies on bighorn sheep. Summers there are typically very wet, with rain almost every day from late June until the end of August. In the evenings, after the thunderstorms had spent their energy and the clouds have started to clear, I would cook my dinner over a campfire, and listen to the beautiful evening serenade of the Hermit Thrush. Ascending, falling, warbling its way through the spruce forest and echoing off the granite cliffs, it was the sound that encapsulated my experience of being in the mountains. Even though it’s not technically a mountain bird, having a pretty widespread distribution in woodland over much of the US, it’s the sound that I associate with high elevation forests.

I may never be able to record the musical sound of ice thawing in a lake, or a volcano flow that sounds like broken glass, but I have been able to record a Hermit Thrush….


This was in the Sierras in July 2012. Like so much of that year, it was windy, even more so as a storm approached. The wind was unavoidable, and rather than filter it out of the recording, I incorporated it. Near the end you can also hear the territorial call of a Douglas squirrel, known locally as a chickaree.

What about you? What are some of your favorite ‘sonic memories’?

Christine Hass is a biologist based in Arizona, United States, and a regular contributor to the Nature Soundmap blog. This article originally appeared on her own blog www.wildmountainechoes.com.
« Older Entries
Password Reset
Please enter your e-mail address. You will receive a new password via e-mail.
Close

A ridiculous amount of coffee was consumed in the process of building this project. Please consider adding some fuel if you'd like to keep it going!